Winner of the prestigious Homes & Gardens award, the String Light by Michael Anastassiades is an architectural masterpiece. A deceptively simple idea of a pendant in a choice of designs, suspended by a very long cable which can be strung in infinite ways to create fascinating lighting. Another modern feature is that the light can be controlled by an iPhone with the use of a special app. 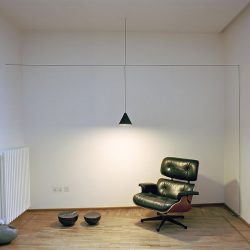 The Flos OK light was inspired by the Parentesi, a longstanding Flos favourite which has been in production since 1971, and won the Compasso d’Oro award in 1979. The Parentesi came from an original idea by Pio Manzù of a light which spanned from floor to ceiling with a movable light source. with OK, Konstantin Grcic pays homage to Manzu with a twist on the concept, using an ultra-flat LED surface with edge-lighting technology. 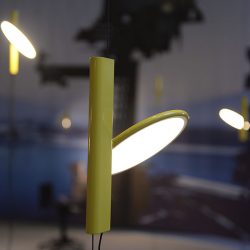 Paul Cocksedge designed the Shade Floor Lamp for Flos, inverting the traditional lampshade and using innovative technology and materials to create an illusion. The light source is actually placed on the floor, which minimises the need for visually intrusive power connections. The large, natural paper shade is strung from near invisible nylon wires, giving the appearance of floating in space. Beaming the light from the floor reduces any dazzing glare.

The Ipnos Light by Nicoletta Rossi and Guido Bianchi is inspired by taking a traditional lantern, and stripping away any unneccessary detail, leaving just a metal frame. The light source is hidden in this skeleton of aluminium, giving off diffused light and leaving the space inside the lamp empty. The Ipnos can be used indoor or outdoor. 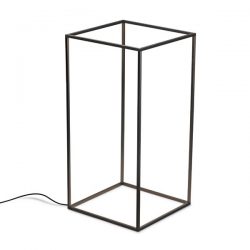 The IC Light explores balance, taking it’s basic form a sphere that is perfectly balanced on the edge of a rod. Designer Michael Anastassiades was influenced by a video of a contact juggler spinning spheres, moving them around on his arms and edge of his fingers. Mesmerized by his skill, suddenly the spheres look perfectly still. The initials IC come from the codes that English police use to define the perceived ethnicity of a person they stop in the street, used as a playful story to define the different designs. 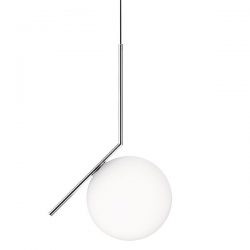 The unashamedly fun Chapo Table Lamp is designed by the legend, Philippe Starck. Influenced by icons such as Fred Astaire throwing their hat onto a stand as a slightly swaggering masculine gesture from bygone times. Its quirky retro charm underlies the Chapo table lamp, a playful piece and theatrical object. The character of which can change depending on the hat chosen! 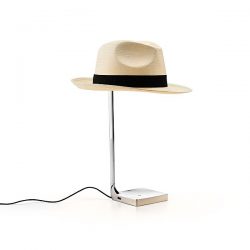 We offer unbeatable pricing on Flos products – please contact us for further details.